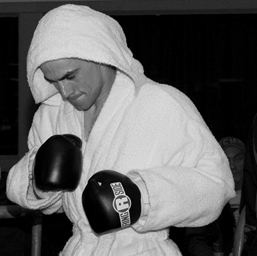 When meeting Kyle McNeil for the first time, it’s hard to not think about the old saying that dynamite comes in small packages. Born on Oct. 11th 1991 in Quispamsis N.B., McNeil would relocate to Nova Scotia where he’d take up the sport of boxing at the age of 11 while weighing all of 92 pounds. He’d fight for the first time on a card held in Newfoundland and from there would go on to fight a total of 78 amateur bouts, winning 63 of those.

He’d twice capture the Nova Scotia Golden Gloves and win a Bronze medal at the Canadian National Championships shortly before making the jump to the punch for pay ranks, making his Pro debut on Aug. 6th 2011, scoring a TKO over Evan Allison in a bout held in Shediac N.B. Next up on McNeil&#39;s hit parade would be Quebec’s tough Gerald Audate who’d been in with the likes of highly regarded prospects Abdow Sow, C.J. Borden, Tyler Asselstine, and Nicolas Valcourt before facing McNeil on Jan. 21st of 2012 at the Forum in Halifax. McNeil would outwork the Quebec visitor, winning all 4 rounds to capture the decision by scores of 40-36 on all 3 judge’s scorecards.

Two months after beating Audate, McNeil would take on Manitoba’s Tim Watts and score an impressive decision. Staying busy, Kyle would fight for the second time in his native N.B, facing Quebec City’s Tomy Lene Bradet in a Hub city fight on June 23rd and score win number 4, out punching Bradet to earn a close decision. The action filled bout earned a standing ovation from the fans on hand at the Red Ball Center that night. McNeil would close out 2012 with a TKO over Tim Watts in a rematch of their March 24th fight, leaving no doubt this time around.

McNeil would then fight twice in 2013 with mixed results. On April 26th, Santa Fe, New Mexico’s Aaron Martinez would make the trip to the Nova Scotia capital and leave town with a close decision over the aggressive McNeil, who gave everything he had while dropping the majority decision. With his record now standing at 5-1, McNeil would end the year getting back on the winning side of things.

On Aug. 24th, he’d take on Minneapolis Minnesota’s Hassan Wasswa, who’d be fighting the 23rd fight of his Pro career when the 2 faced each other at Africville Park in Halifax. Wasswa had fought some tough guys along the way. He’d been in the ring with the likes of Ira Terry (13-0) and Kieyon Bussey (4-0) as well as facing Halifax’s Tyson “Prince of Hali” Cave who’s the current W.B.U world super-bantamweight champ. McNeil didn’t make Wasswa feel too welcomed, scoring a hard hitting decision over him.

In his only fight of 2015, McNeil would run into a road block by the name of Joey Laviolette. The bout between the two would take place on July 25th in Spryfield. Laviolette was a former three-time Canadian Amateur champ with unlimited skills. McNeil would make Laviolette work for the win. The action would go back and forth with both fighters landing telling blows. The hard fought fight would be stopped late in round six. No shame in losing to a fighter of Laviolette’s caliber.

McNeil would bounce back and score the biggest win of his career in his next fight. On August 6th, 2016, Kyle would face the always willing Jessie MacMillan in a scheduled six- rounder with the National Boxing Authority Maritime Lightweight title at stake. The bout would turn out to be a real brawl with both giving it their all. The fans on hand for the Halifax bout, including Canadian boxing legend George Chuvalo, gave both fighters a well-earned standing ovation at the final bell. McNeil would capture the decision to move his record to 7-2.

On a recent Monday night, McNeil stopped off at the Fists Boxing Club in Moncton to spend time with a number of youngsters training there. He helped out by working on the focus pads with several of the young boxers who were thrilled to meet him.

He had the following to say about his boxing career: “In a year or so, I’d love to fight for the Canadian title. Maybe down the road, a rematch with Laviolette could take place. Another fighter I’d like to fight is Ontario’s Josh O’Reilly who is undefeated”. Trained by the well respected Bob Taper, McNeil is willing to fight anyone.

When not boxing, Kyle has worked as a stuntman in a number of movies. He’s appeared in Un-done, Mr. D and on TV’s Jesse Stone. Known as “Real Deal” when he steps through the ropes, he’s proven himself to be that and more. Like he said during his trip to the Hub City “It’s not the size of the man in the fight. It’s the size of the fight in the man”.

Boxing fans are sure to be hearing a lot more from McNeil who added that he fights for the love of the fight. For the blood, sweat and tears of the journey and for the sweet taste of victory when it comes. Kyle McNeil is a throw back to the days when fighters did their talking with their fists!