It’s amazing how much skill some fighters are born with. Great chin, fast hands, punching power and heart are just a few of the things needed to make a champion.

Nova Scotia’s Ricky Anderson would prove that he was a champion from the first time he fought as an Amateur in 1974. He’d go on to win the Nova Scotia Fly-weight title in his first year as a boxer. In 1975, he’d capture a Silver medal at that year’s Canada Games held in Lethbridge AB. In 1977, Anderson would become the first Canadian born boxer to beat a Cuban fighter. 1980 would see Ricky make the Canadian Olympic Team but he would not get the chance to represent his country as Canada would be one of the countries that would boycott the Games that year.

1981 would prove to be another exciting year for Anderson as he’d win Gold at that year’s North American Championship and then win Silver at the World Cup of Boxing held in Montreal. With an impressive Amateur record of 85-12, Anderson would make the jump to the punch for pay ranks on June 1st 1982, scoring a TKO over Toronto’s Averell Brady in a bout held in Halifax’s famed Forum. 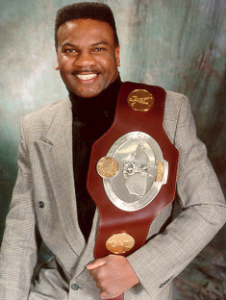 Over the next two years, Anderson would score wins over Clyde Graves, Reggie McLean, Bobby Buscombe, Albert Cox, Billy Smith, Jose Vera, Felix Vanderpool, Jerome Artis, Armando Pinel, and Bobby Hecket with only Graves and Vera going the distance with him as he built his record to 11-0. (Vanderpool would be undefeated at 5-0 when he traded punches with Anderson on February 28th 1984 and would never recover from the loss to the classy NS southpaw, losing three of his next four fights before fighting for the last time in September of 1985).

The American born Vera would go on to fight a total of 49 Pro fights, facing the likes of John Scully, Buster Drayton, Dana Rossenblatt and Drake Thadzi. He’d go on to twice challenge for the World title. Vera would also go the distance with future World champs Thadzi and Drayton as well as lasting the distance against Rosenblatt who would retire with a record of 37-1- 2 with 23 knockouts.

On October 20th 1984, Anderson would run into trouble when he faced the 45 fight Venezuelan born veteran Ray Chavez Guerrero in a bout held in Dartmouth. Chavez Guerrero had been in with a number of the World’s best during his career. He held wins over Donato Paduano, Fernand Marcotte, Al Franklin, and Clyde Gray and had lasted into the 15th and final round against the then 30-0- 1 World champ Wilfred Benitez in a fight for Benitez’s title.

The then 32-10- 3 Guerrero would score a TKO over Anderson. Following the loss, Anderson would do what true champions do, he’d bounce back and score a pair of impressive wins over Jamie Ollenberger and John Hebert to set up a re-match against Guerrero. On April 30th 1985, the two would meet again with a much different ending. The flashy Anderson would score an eighth-round TKO, and with the win, he’d capture the Canadian Welter-weight championship.

On July 30th, Anderson would make his first title defense against the rough and rugged Donnie “El Toro” Poole of ON in front of a standing room only crowd at the Forum in Halifax. Action would go back and forth but in round 10, Poole would get Anderson in trouble, forcing Referee Hubert Earle to call a halt to the action at the 2:26 mark of the round, making Poole the new Canadian champ. (Poole would never defend that title and he’d retire with a record of 30-6- 1 with 21 knockouts, scoring his final win on July 13th 1990, beating Larry Nichols in Jackson Florida). 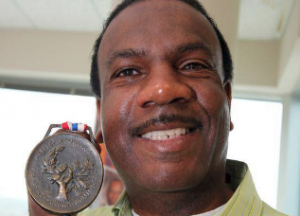 Anderson would show that he still had plenty of fight left in him. Less than four months after losing to Poole, Ricky took on New York’s Juan Cantres and he’d score a knockout in what would prove to be Cantres’ last fight. Anderson would then score a decision over the solid John Hebert on March 4th to start off 1986 with the vacant Canadian 147-pound title on the line. (The title became vacant after champion Poole retired).

Anderson would make a successful title defense against Hull QC’s Denis Siguoin who was coming off of a stunning TKO of Halifax’s Chris Clarke. Anderson captured a decision over Siguoin on December 9th to end ’86 on a winning note. Anderson would fight for the final time on January 24th 1987. He’d score a TKO over California’s Daniel Cortez in Sydney NS. (Anderson would retire following the win over Cortez due to a knee injury).

During his exciting ring career, Anderson would twice be named as Nova Scotia’s Athlete of the Year for 1980 and 1982. He’d retire with a Pro record of 18-2 with 12 knockouts. He’d be honoured with the well-deserved induction into the Nova Scotia Sports Wall of Fame in 2003.

Today, Anderson works as a Drug Prevention Officer and can be seen at all the fights taking place in Nova Scotia as he is part of the Nova Scotia Boxing Authority. Ricky Anderson, a true champ both in and out of the ring and a true credit to the Sport of Champions. Thanks for all the memories, Champ!